Report on Coal Mine Bonding in Central Appalachia

The Alliance for Appalachia, a coalition of 15 organizations, today released a report on the state of surface coal mine bonding in four Central Appalachian states. Bonds are used to ensure reclamation of mine sites, should a company be unable to finish reclamation. The report details the bonding programs in West Virginia, Virginia, Kentucky, and Tennessee, and recommends improvements that state and federal agencies should make to better protect communities and the environment.

“Bonding practices across Central Appalachian states are woefully inadequate to protect communities, the environment, and taxpayers from having to deal with mountaintop removal mines and other surface mines that have not been adequately reclaimed,” said Davie Ransdell, member of Kentuckians For The Commonwealth. “If mines are not properly reclaimed, they can leave behind water pollution and other hazards that make the sites unsuitable for any future use. This will only further damage Central Appalachia’s economic future.”

A slew of coal company bankruptcies beginning in 2015 highlighted the urgency of bonding reform. In 2016, the federal Office of Surface Mining Reclamation and Enforcement (OSMRE) issued a policy advisory urging states to strengthen bonding requirements and, later that year, OSMRE announced it would pursue a bonding rulemaking. In 2017, OSMRE rescinded the advisory and has since shown no signs of pursuing a rulemaking.

Earlier this month, the Government Accountability Office issued a report on bonding and urged Congress amend SMCRA to eliminate self-bonding, a practice where coal companies provide mine reclamation guarantees based on their own financial health, rather than through third party, full cost bonding.

“Currently, self-bonds are still used for mines in Virginia and West Virginia, and pool bonding is used in Virginia, West Virginia and Kentucky. In the face of widespread bankruptcies, neither system is sufficient for guaranteeing reclamation, because neither provides enough money for the full cost of reclamation,” said Erin Savage, Central Appalachian Program Manager at Appalachian Voices. “Under pressure from local communities, these states have tried to address bonding inadequacies before, but changes have fallen well short of what is needed. For example, Virginia has attempted to eliminate self-bonding, but several mines owned by West Virginia Governor Jim Justice still have self-bonds in place.”

This report is meant to provide greater detail on the particular bonding problems in Central Appalachian states. The Alliance for Appalachia issued the report to lend further evidence for the need to eliminate self-bonding and pool bonding of surface coal mines across the country. 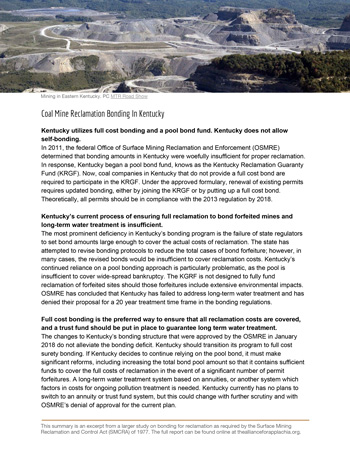 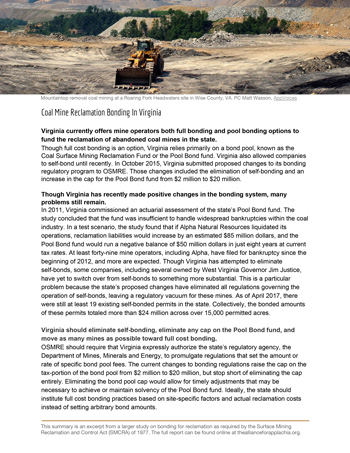 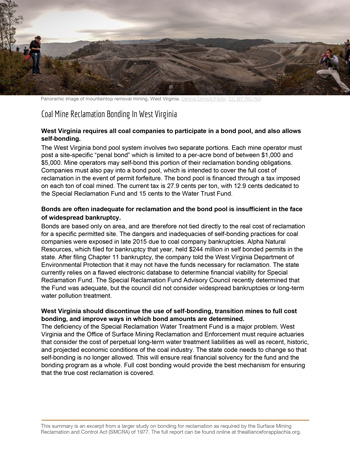