The Alliance has recently been talking about our upcoming trip to Washington, D.C. and with only 15 days before we depart, we are excited and fired up to speak truth to power. From September 23 thru 26th, 40 Appalachian leaders from 6 states will meet with members of Congress asking for their support of the RECLAIM Act and to increase and extend the tax that funds the Black Lung Disability Trust Fund.

Stanley Sturgill is a community leader from southeast Kentucky who will be traveling with Kentuckians for the Commonwealth, an Alliance member organization. He’ll be sharing his story of living with black lung disease in a community impacted by active and abandoned coal mine sites. Read Stanley’s story below and stay tuned as we highlight more voices from Appalachia in the weeks to come. 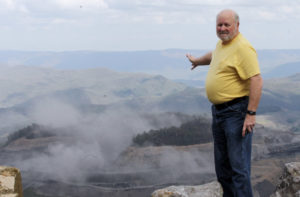 My name is Stanley Sturgill. I’m a 73-year-old retired coal miner from the little coal camp called Lynch in southeast Kentucky. I worked underground for 41 years and I have black lung disease. My wife and I love where we live at the foot of Black Mountain, the highest and one of the most beautiful mountains in the state. I am writing this because I want to build a bright future for my family, for Appalachia, and for this world. I have a vision where my children, grandchildren, great-grandchildren can have good jobs that support our families without doing damage to our water, air, land, and climate.

But this future is uncertain. In eastern Kentucky, we have been suffering the early effects of climate change for more than a hundred years. We have dug the coal that has generated the electricity that has powered this country. But we’ve paid in miles of destroyed streams, in our health, and in our declining economy, including thousands of jobs lost in recent months.

Our present political leadership has failed us. In Kentucky, they have allowed the coal companies to blow up our mountains, and destroy our rivers and streams. Nationally the EPA has been given the “go ahead” to allow each state to control their own poisonous emission levels. Kentucky is a congressional passed, “coal sanctuary” state so it is not going to be an easy task trying to defeat a state that believes in nothing but coal and the destruction of our mountains to get it. Most recently the Revelation Coal Company has striped mined a huge area near where I live. They started in Cumberland, Kentucky just behind our local community college and have mined around parts of Black Mountain to just above the Cumberland Elementary School. Their next objective is to continue strip mining around Black Mountain, eastward and above the historic town of Benham, Kentucky. This mining threatens the drinking water systems of both Benham and Lynch, Kentucky as the mining progresses around the Benham Spur of Black Mountain.

I know many people of our area support mountaintop removal, strip mining, highwall mining, etc., therefore in many instances, I’m not well thought of for my opposition of these types mining. But, I oppose this mining because I want our “God Given” mountains to stay intact, our water and streams not poisoned. These seams of coal can be underground mined, but King Coal can mine the seams much cheaper and with fewer miners in just a few months by destroying our mountains. In essence, the Kentucky legislature, the EPA, and the coal companies really do not care. None of them live where I do, so they don’t have to worry about the unsightly mess and poisoned drinking streams we are left with. Their next big issue will be fighting over any money appropriated by the government for fixing what they destroyed, so our local level can’t get it

It’s not going to be an easy task, but we believe we can do this. We are already working to build a just economic transition. One good example is my neighbors in Benham, Kentucky. They are helping people insulate and tighten up their 100-year-old coal camp homes, and save money, and create good jobs that can’t be outsourced.”–Stanley Sturgill

Learn more about the trip and how you can contribute.

alabamaAppalachian VoicesCenter for Coalfield JusticeKentuckians for the CommonwealthkentuckyMountaintop RemovalMTRPennsylvaniaSouthern Appalachian Mountain StewardsStatewide Organizing for Community EmpowermenttennesseeVirginiawest virginia
Stronger Together, Join an Alliance Team
I am a retired coal miner and very proud of that work!