Successful Rally at the White House Council on Environmental Quality

Today dozens of residents from Appalachia and allies from across the country rallied at the White House Council on Environmental Quality (CEQ). Those wishing to contact the CEQ to support residents can take action here. 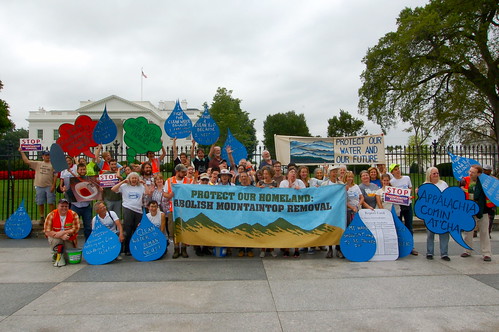 This office oversees the Environmental Protection Agency, the Office of Surface Mining and other agencies that are responsible for protecting Appalachian residents from the severe water and health impacts of mountaintop removal and other dangerous coal practices.

Appalachian leaders met with the agencies yesterday and were disappointed with the attitude the administration showed towards those that had traveled many hours to DC for the visit. The agency representatives asked for more time to work on the issue, but mountain leaders have been waiting five years since an Obama administration Memorandum of Understanding that promised action against the destructive practice as well as reinvestment in the economy of the region. 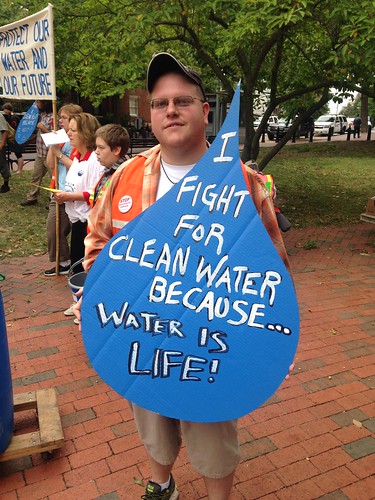 The tragic and unbelievable series of toxic water spills in Appalachia in 2014 alone – from the 300,0000 people impacted by the spill in West Virginia to coal ash and coal slurry spills in West Virginia, Virginia and North Carolina – are just the most recent disasters to show the failures of the Obama Administration to follow through on its promises to protect Appalachian communities. There have been over 500 mountains destroyed by mountaintop removal coal mining and the region is ready for a just transition to a new economy beyond this destructive practice. 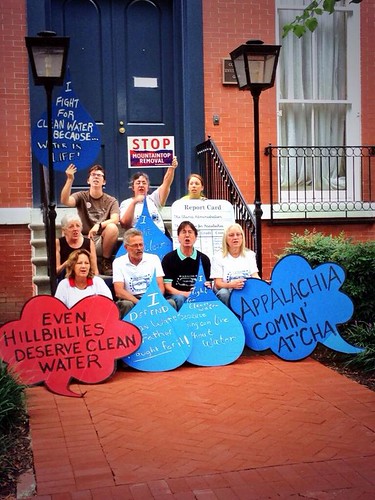 The group engaged in a sit-in on the front steps of the CEQ and waited several hours for an agency representative to come out to speak with them – as well as hosting a square dance with a live band playing traditional Appalachian music in front of the CEQ. In addition, residents organized a bucket brigade to collect clean water from DC to bring back home to their communities which do not have access to safe water to drink.

When no representative agreed to meet with residents after several hours of waiting, residents placed a reportcard on the steps which evaluated the progress so far of the CEQ on important areas such as protecting the health and water of Appalachia. Participants in the rally gave the administration a grade of “incomplete.”